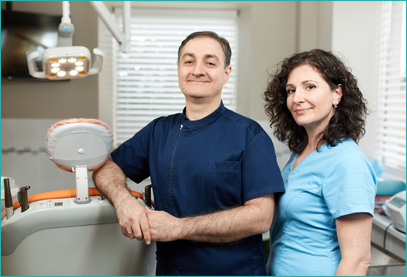 Your smile is in good hands with our doctors’ extensive, comprehensive training.

Dr. Plieva and Dr. Pliev are compassionate dentists in Ottawa and will do what it takes to give you a gorgeous smile at your own pace. Read their stories and give us a call to get to know them in person or visit us at K&K Dental Studio! 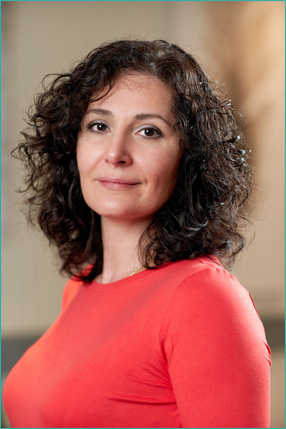 Dr. Plieva was born and raised in the capital of the USSR, Moscow. Ever since she was six years old, Dr. Plieva already knew she wanted to be a dentist.

She graduated from dental school at the Moscow State Medical University in 1996. As one of the top students of her class, she was offered a position of residency at the Department of Prosthodontics at her alma mater, which she successfully finished in 1998, obtaining a Certificate of Prosthodontist. She also received additional specialty training while in Russia.

There, she met her future spouse, Konstantin Pliev, and they became a family in 1998. Upon graduation and a brief maternity leave, Dr. Plieva started her career as a dentist for one of the top private practices in Moscow.

In 2005, Dr. Plieva, Dr. Pliev, and their children moved to Canada and embraced their new country of residence. Dr. Plieva worked as a dental assistant for several orthodontic practices in Montreal and Toronto, until she successfully passed her NDEB certification examinations in 2011, earning back her right to practice general dentistry in Canada.

Dr. Plieva completely shares the same approach to continuing education as her husband and is a member of many respected affiliations.

She is a member of:

Her areas of interest and focus are orthodontics, especially identifying the need for early orthodontic treatment with children, root canal therapies and cosmetic and complex mouth rehabilitation. Dr. Plieva is a regular participant in various courses on different topics such as endodontics, Invisalign, crown/bridge study club, and implantology mini residencies.

Being a mother of three and besides running a busy practice, she takes great pride and satisfaction in housekeeping, knitting, cooking, reading, playing active games and sports with children, listening to music, and enjoying every minute life offers. 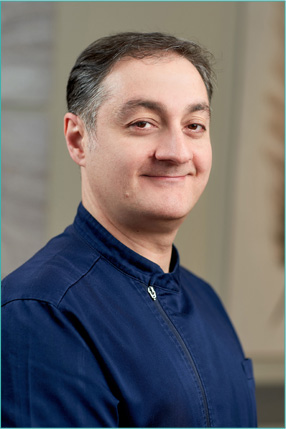 Dr. Konstantin Pliev was born in the southern part of the former Soviet Union, then Georgian SSR, very close to the 2014 Olympic Games.

After completing high school in 1987, Dr. Pliev pursued the medical field with the goal of becoming an oral and maxillofacial surgeon, similar to his mother.

In 1993, he completed his 5-year studies at the Crimean State Medical University in Ukraine and was awarded a DDS degree.

Oral surgery has always been an area of high interest for Dr. Pliev, and after graduation and 1-year internship program at local public health clinics, he was offered a residency position at the Moscow State Medical University, Faculty of Dentistry.

Dr. Pliev is proud to have worked with the most notable clinicians and educators in Russia who stood at the foundations of Implant dentistry and is still considered his best mentors. After five years of intensive schooling, Dr. Pliev was ready to start his dental career with the focus on oral surgery, gum disease treatment, implants and complex mouth rehabilitations.

In 1998, Dr. Pliev married Dr. Karine Plieva, who was a resident at the Department of Prosthodontics of Moscow State Medical University.

After having worked successfully in the private practice, they decided to immigrate to Canada. With their two children, Georgy and Milena, they landed in Montreal in the fall of 2005.

Dr. Pliev decided to go back to school, and attended the University of Colorado Denver, obtaining his second DDS degree.

He passed the NDEB of Canada examinations in 2012 and is Canadian Board Certified and fully licensed by the Royal College of Dental Surgeons to practice general dentistry in the Province of Ontario.

Dr. Pliev is a member of:

Dr. Pliev sees great value in a person’s desire to broaden one’s knowledge and education. He appreciates dentistry is a constantly evolving field and continues augmenting his skills in all areas of dentistry with particular focuses in implantology, oral surgery, and periodontics. He has been fortunate to be trained under renowned clinicians and educators, Professor Fauad Khoury (Germany), Dennis Tarnow (Columbia University), Sacha Jovanovic (UCLA), Marco Degidi (Bologna, Italy), John Kois (Seattle, USA), John Chao (USA) among many others.

Outside the office, Dr. Pliev enjoys company of his three kids, Georgy, Milena, who are university students and their 8-year-old son, Alan Alexander.

He is a fan of good music, occasionally plays instruments with his children, loves being active, playing sport with family, and reading.